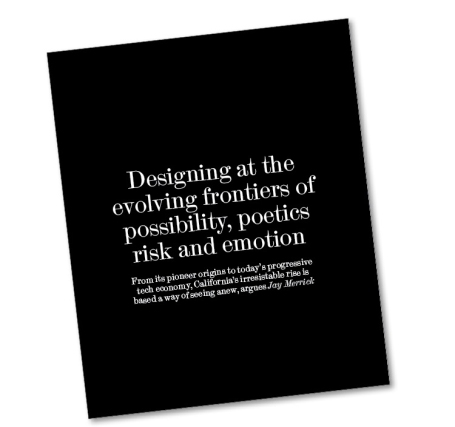 Designing at the evolving frontiers of possibility, poetics risk and emotion

From its pioneer origins to today’s progressive tech economy, California’s irresistible rise is based on a way of seeing anew, contends Jay Merrick

As part of their Time Space Existence exhibition at the 2016 Venice Biennale of Architecture, Form4 Architecture produced 12 visual poems. Their subtle combinations of geometric effects with human and organic figurations have a delicately poised, fugitive quality – Modernist, certainly, but with an alchemical aura that might have been supplied by a suntanned Dr Dee, teleported forward from the 16th century.

A very particular kind of phenomenology is afoot in these visuals. There are short mantras of fertilising words: purpose, desire, wisdom, influence … seek, contemplate, reach, pursue … core, context, continuum … powerful, discordant [12 tone] waves will crash … path, causeway, track. And there are fragmentary statements, such as to locate an equipoise of variables, and constantly risking absurdity – the latter is the title of a 1958 verse by Californian Beat poet, Lawrence Ferlinghetti.

Are Form4’s visual poems the work of distinctly Californian architectural psyches? Do they reflect the ambitions of the state’s characteristic citizens – the perma-churn of newcomers, entrepreneurs and rebels who operate in what John Marx, originally from Illinois, describes as ‘edge conditions in the world order’? These conditions have encouraged unusual architectural explorations and perceptions, like this one from Reyner Banham in 1971: ‘Los Angeles is the Middle West raised to flashpoint, the authoritarian dogmas of the Bible Belt and the perennial revolt against them colliding at critical mass under the palm trees. Out of it comes a cultural situation where only the extreme is normal, and the middle way is just the unused reservation down the centre of the freeway’.

…the full story continued on page 55