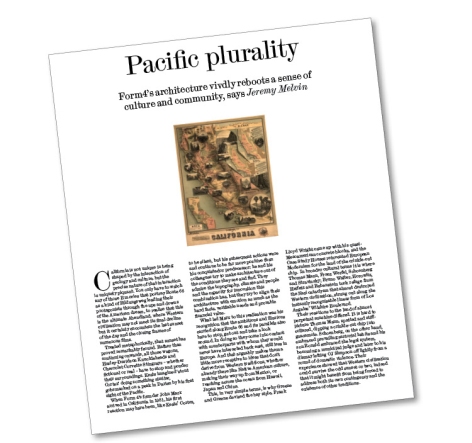 California is not unique in being shaped by the interaction of geology and culture, but the precise nature of that interaction is uniquely piquant. You only have to watch any of those B movies that portray Route 66 as a kind of Bildungsweg leading their protagonists through the ups and downs of the American dream, to realise that this is the ultimate Abendland, where Western civilisation may not meet its final decline but it certainly encounters the last sunset of the day and the closing frames of numerous films.

Treated metaphorically, that sunset has proved remarkably fecund. Rather than continuing onwards, all those wagons, Harley-Davidson Knuckleheads and Chevrolet Corvette Stingrays – whether fictional or real – have to stop and ponder their surroundings. Keats imagined ‘stout Cortez’ doing something similar, gobsmacked on a peak in Darien by his first sight of the Pacific.

… the full story continued on page 70