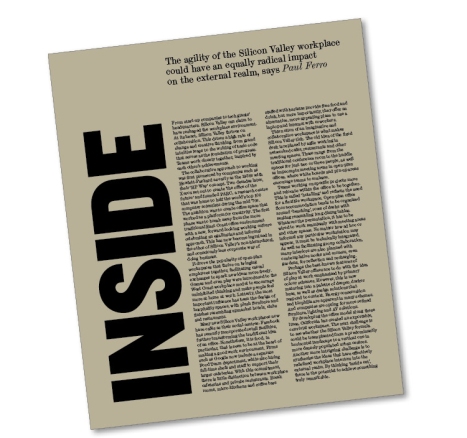 The agility of the Silicon Valley workplace could have an equally radical impact on the external realm, says Paul Ferro

From start-up companies to tech giants’ headquarters, Silicon Valley can claim to have reshaped the workplace environment. At its heart, Silicon Valley thrives on collaboration. This drives a high rate of change and creative thinking, from grand intuitive leaps to the writing of basic code that serves as the foundation of progress. Teams work closely together, inspired by each other’s achievements.

The collaborative approach to working was first pioneered by companies such as Hewlett-Packard as early as the 1950s with their ‘HP Way’ concept. Two decades later, Xerox set out to create ‘the office of the future’ and founded PARC, a research centre that was home to half the world’s top 100 computer scientists during the mid ’70s. The ambition was to create office space that worked as a platform for creativity. The first phase was to break away from the more traditional East Coast office environment with a new, forward-looking working culture celebrating an egalitarian and informal approach. This has now become ingrained in the ethos of Silicon Valley’s non-hierarchical, and consciously less corporate way of doing business.

… the full story continued on page 69